Broadway star Laura Osnes will join the Mormon Tabernacle Choir and Orchestra at Temple Square for their popular annual Christmas concerts on December 17, 18, and 19 in the Conference Center in Salt Lake City. Taking the stage with Osnes will be acclaimed British screen and voice actor Martin Jarvis.

Osnes and Jarvis will be joined by four Metropolitan Opera soloists—Erin Morley, soprano; Tamara Mumford, mezzo-soprano; Ben Bliss, tenor; and Tyler Simpson, bass—adding a classical dimension to the musical repertoire. The concerts are under the direction of Mack Wilberg, music director of the choir, and Ryan Murphy, associate music director.

“This is going to be an unforgettable concert, ” said Ron Jarrett, president of the Mormon Tabernacle Choir. “Where else can you find such a depth of talent in all performing disciplines all on one stage? We are truly blessed to have this fabulous ensemble of artists spend Christmas with us.”

The free performances are arguably the hottest tickets in town during the Christmas season, and this year will be no exception. “We are overwhelmed and humbled by the response of our audiences each year, ” said Wilberg.

The required complimentary tickets are limited to two per household and will be distributed through a random selection process. Patrons may register for a chance for tickets online at from Saturday, October 24, at 12:01 a.m., through Monday, November 2, at 11:59 p.m.

All registrations received during those 10 days will have an equal chance at receiving tickets in the random selection process. Not all registrations will be selected to receive tickets, and only one registration per household can be accepted.

Patrons will be notified by email about the results of the random selection process. Tickets will be mailed to those selected shortly after the registration process closes. Special note: No tickets will be required for the 30-minute Music and the Spoken Word broadcast on Sunday, December 20, 2015, in the Conference Center.

Osnes is an award-winning Broadway actress with long list of credits not only from the New York stage but also from the Hollywood screen. She was nominated for the Tony Award for Best Leading Actress for her role in Rodgers & Hammerstein’s Cinderella. She won the Drama Desk Award for her work in Cinderella that same year and also had a Tony nomination for Bonnie and Clyde in 2012. Osnes has appeared in numerous concerts and showcases, including performing with the New York Philharmonic and the New York Pops and appearing in such venues as Carnegie Hall, the Cafe Carlyle, 54 Below, the New Jersey Performing Arts Center, and Las Vegas Smith Center. In addition to being heard on several cast recordings, Laura has two solo albums, Dream a Little Dream: Live at the Café Carlyle and If I Tell You: The Songs of Maury Yeston. 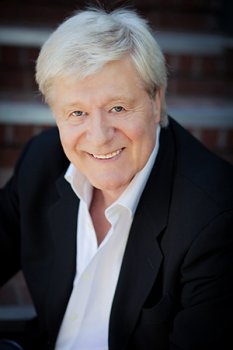 Jarvis has a countless string of accolades in his career, with performances in the United States and the UK where he has appeared on Broadway and the West End, in movies and television, and voicing animated productions. He received the Theatre World Award for his starring role as Jeeves on Broadway, which was also filmed for PBS. He appeared as Sir Cosmo Duff Gordon in the multi-Oscar-winning Titanic and lent his voice to Disney’s Wreck-It Ralph. For three years, along with Judi Dench, he led Sir Peter Hall’s company at the Royal National Theatre in works by Pinter, Frayn, Shakespeare, and Wilde. He has directed more than 100 major productions for BBC radio and NPR in America. Martin is invested by the Queen of England as an OBE (Officer of the British Empire) for his services to drama.

The Grammy Award-winning, all-volunteer Mormon Tabernacle Choir is made up of 360 men and women who join their talents to create their trademark, instantly recognizable sound. They are accompanied by the Orchestra at Temple Square, a 150-member symphony that is likewise all volunteer.

The choir has appeared at 13 world’s fairs and expositions, performed at six U.S. presidential inaugurals, and sung for numerous worldwide telecasts and special events—all this while broadcasting Music and the Spoken Word, the oldest continuing radio network broadcast, a weekly tradition now in its 87th year. The choir has its own recording label and has just released the CD and DVD versions of last year’s Christmas concerts with the Muppets® from Sesame Street® and Santino Fontana, titled