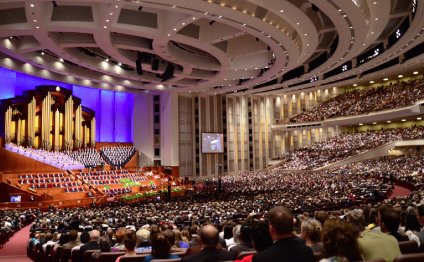 For more than eight decades, nearly the lifetime of radio, the Mormon Tabernacle Choir has presented a weekly program — Music and the Spoken Word — without interruption, giving voice to peace, hope, inspiration and the goodness of God. No other broadcast can claim such a heritage.

While many music programs come from a studio built for that purpose, Music and the Spoken Word goes out to the world from its home in the Tabernacle on Temple Square, which announcers have called “the crossroads of the West.” The building, completed in 1867, has become a recording studio with a stellar reputation for sound quality. In busy summer months, tourist attendance has required the program to be broadcast from the much larger Conference Center across the street. Both buildings are equipped with state-of-the-art technology. Since the beginning, the Choir has opened the weekly program with what has become a hallmark, the 1835 hymn “Gently Raise the Sacred Strain.” Choir Music Director Mack Wilberg plans each week’s program.

What was once just a show coming across the kitchen radio made the jump to television in 1962, and cable and satellite broadcasts soon followed. Today, Music and the Spoken Word is viewed with increasing frequency on social media channels, such as YouTube, Facebook, and the choir website by people around the world, from the United States and Chile to the Philippines and England.

The first airing on July 15, 1929, was makeshift at best. That summer day, a local radio crew ran a wire from their control room to an amplifier in the Tabernacle nearly a block away. The technicians suspended the station’s sole microphone from the domed ceiling not only to capture the music of the Choir but also so an announcer could introduce each number. Nineteen-year-old Ted Kimball—son of the Tabernacle organist and the designated announcer—perched on a ladder for the duration of the program so that those listening could hear his words.

Eleven months later, 24-year-old Richard L. Evans became the first regular program narrator, and for the next 41 years (1930–1971) he was the voice of Music and the Spoken Word. He never missed a broadcast, even with his later assignment as an Apostle of The Church of Jesus Christ of Latter-day Saints. His uplifting, three-minute sermonettes often addressed themes from the Choir’s music. Those listening knew his voice and appreciated his words of comfort, gratitude, happiness, duty, and love.

Since the program’s singular beginning and through years of remarkable change in broadcasting, the Choir has held its place providing music and inspiration for everyday living. Special programs commemorate holidays –Christmas and Easter-and singular events such as 9-11, Martin Luther King Day and July 4.

Many guest artists have joined the Choir on the program and spoken of their experience. Angela Lansbury said that being on stage with the Choir might mirror what the viewers experience: “They kind of get under your skin and you just want to be around them. They exude so much warmth and love and such a wonderful spirit of giving.”

Down by the Riverside - Mormon Tabernacle Choir