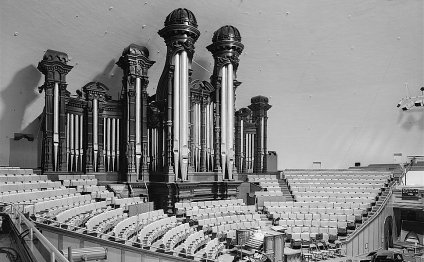 Complementing the voices of the 360 choristers who comprise the Mormon Tabernacle Choir is the sound of the majestic Tabernacle organ—one of the world's largest and most distinctive instruments.

Much more than an icon, the organ and its 11, 623 pipes breathe a warm, refined sound that blends perfectly with the voices of the Choir.

Located in the historic Tabernacle on Salt Lake City's Temple Square, the organ is a massive, yet intricate instrument. Together with the Tabernacle itself, the organ is in no small way responsible for the signature sound of this world-renowned choral ensemble.

The original organ was built by Joseph Ridges, an English convert to The Church of Jesus Christ of Latter-day Saints who came to Salt Lake City by way of Australia. Ridges' modest instrument, built with old-world craftsmanship and a liberal dose of pioneer ingenuity, was constructed of materials native to the region as far as possible. Though the organ has been rebuilt and enlarged several times during its 135-year history, the original casework and some of Ridges' pipes still remain in the organ today.

Currently, the Mormon Tabernacle Choir has a staff of five professional organists: Richard Elliott, Clay Christiansen and Andrew Unsworth assisted by Bonnie Goodliffe and Linda Margetts. The organists accompany the Choir during its weekly radio and television broadcasts of Music & The Spoken Word as well as in recordings and other concert appearances. They also perform daily 30-minute recitals on the historic Tabernacle organ as well as the Conference Center organ in the summer.