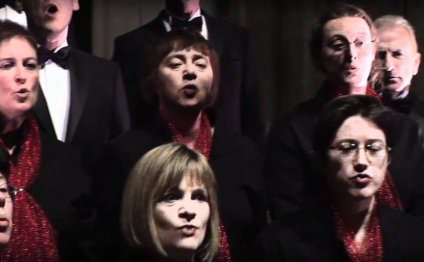 Each year, the Christmas concert presented by the Mormon Tabernacle Choir and Orchestra at Temple Square is seen by more than 85, 000 people live and by millions more via television broadcast. It is a full-scale production featuring world-class musicians, soloists, dancers, narrators, and music that leaves viewers in awe of the Choir’s unmatched magnitude and musicality.

My thoughts after listening

Within the last five years I have become a huge fan of the choir, and I am continually impressed by their work. I love them so much that I was willing to by and listen to a Christmas CD in mid-September. I just couldn't wait. Ring Christmas Bells is a great listen. I have to admit first off that I was not as impressed this year as I was last. Brina Stokes Mitchell and the choir perform wonderfully, and the individual tracks are fantastic, but as a whole, the CD lacks flow. I would like to repeat though, the tracks are fantastic. "God Rest Ye Merry Gentlemen" took some getting used to, but I have warmed up to the new arrangement. Through Heaven's Eyes" has always been a powerful song, but the choir was able to take it to a whole new level. Richard Elliot (who has become my favorite organist) did not disappoint with "Go Tell it on the Mountain". "Angels from the Realms of Glory" has been performed better in previous CD's. Mitchell is a little overpowering at the beginning. "Grateful", although not particularly Christmasy, is beautifully performed. The song that most eloquently bears the spirit of Christmas is "Once in Royal David's City". It is sung simply yet powerfully. I could go on about each track, but I just have to say they each are inspiring, and I recommend strongly this CD to get you in the Christmas mood.

Angela Lansbury and the Mormon Tabernacle Choir - We Need ...

The Mormon Tabernacle Choir & Orchestra - Carol Of The Bells