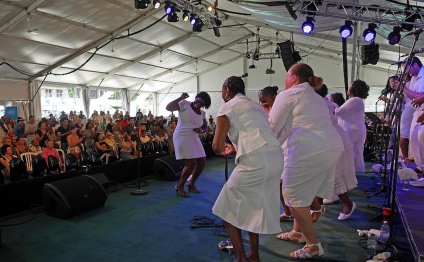 Seeds of this gospel choir were sown during the choir’s initial live recording concert as part of the Association of Gospel Music Ministries workshop in October 1988. Since then the choir has recorded ten albums including the Juno award winning album, Instrument of Praise, which won Contemporary Christian/Gospel album of the Year in 2003; Going Home, an all Caribbean gospel project in 2008, a Christmas album entitled A Christmas Gift in 2010 and its most recent worship album entitled Made for Worship which was released in May 2014 as a CD+DVD combo.

In 2012, to kick off the choir’s 25th performance season a compilation album 25 was released. This compact disc features highlights of the choir’s original music of the past 25 years. That same year, TMC was also awarded the Lifetime Achievement Award from the Gospel Music Association of Canada.

Karen Burke, a graduate of McMaster University, the Royal Conservatory of Music and a Professor of music at York University, is the director of the diversified group of singers and musicians along with her husband, Oswald Burke, who is their Executive Producer.

Now 35-strong plus a five-piece band, the not for profit choir consists of adult members who are from various local church denominations including Baptist, Church of God, Wesleyan, Missionary and Pentecostal.

Toronto Mass Choir has appeared on many radio and television broadcasts for stations such as CTS, CBC Radio One, CITY-TV and has been the focus for several television documentaries.

The choir has also been a special guest at countless church services, festivals, award shows and venues such as The Ottawa Bluesfest, Quebec’s La Festival de Musique Sacree de Saint-Roch, the Toronto Jazz Festival, the Canadian National Exhibition, Missionfest, the Empire Club of Canada, Roy Thompson Hall with the Toronto Symphony Orchestra, Hamilton Place with the Hamilton Philharmonic Orchestra and at the Gospel Music Workshop of America conventions in Washington, DC, Atlanta and Detroit. The choir has also appeared with well-known Gospel singers such as Tramaine Hawkins, Alvin Slaughter and Take 6, Canadian recording artists such as Michael Burgess and Jane Bunnett and jazz legend, Jon Hendricks.

Mission: To create and perform Gospel music that will draw all people into the awesome presence of God.