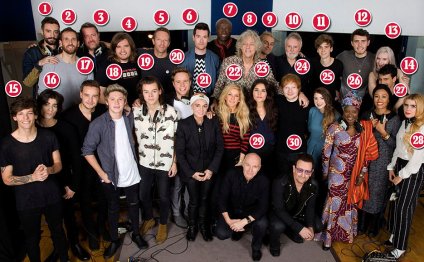 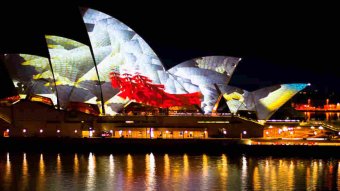 Projections on the giant sails of the Sydney Opera House, which served as the venue for the YouTube Symphony Orchestra concert. Chris Phillips/YouTube hide caption

With nothing else to do early Sunday morning but sleep, I instead got up at 5 to watch the live Webcast of the YouTube Symphony Orchestra at the Sydney Opera House in Australia. And I'm glad I did.

This was no fusty affair. It was classical music outreach on a global scale, with an exuberant mix of musicians, videos, live projections, smart programming, social media and video technology firing on all cylinders.

The grand finale concert capped off a week of concerts and events in Sydney involving 101 young musicians from 33 countries and five continents, each of whom auditioned online to play in an orchestra let by conductor Michael Tilson Thomas. His first YTSO venture culminated in a Carnegie Hall concert in 2009.

There were no golden-toned voiceovers introducing the music with hallowed reverence. Instead, Tilson Thomas himself casually emceed the proceedings, promising at the start, "This will not be just an ordinary concert."

He was right. Visually, even on my small computer screen, almost everything about it was striking. A light artist, wielding what looked like an overgrown Etch A Sketch board and light stylus, created spontaneous drawings and animations that were projected on the giant sails of the opera house facade and within the hall as well. Cameras captured the light show from a variety of distances.

After each piece was performed, a short video focused on a single orchestra member. A violinist from Chernobyl kept getting sick, so his family moved to Argentina, where he learned part of his technique by watching old Jascha Heifetz videos. Another fiddler, Ozgar Baskin from Ankara, pleaded into the lens, "Nobody knows the real Turkey, they think we are riding camels or we are terrorists. Please come see us, the real Turkey." This was good storytelling, very well produced.

Professionals from big-deal orchestras like the Berlin Philharmonic, the London and Chicago Symphony orchestras and others mentored the young YouTube players. And in just a week's time, they did a pretty good job. The group sounded better than their 2009 counterparts, starting off with a vigorous account of Berlioz's Roman Carnival Overture and ending nearly three hours later with several sections from of Stravinsky's Firebird Suite. While the string tone could have been more lustrous and some entrances could have been more seamless, it was hard to complain amid all the good feelings.

Tweets streamed by from Pakistan, Poland, Brazil and probably a hundred other places. The music itself was varied as well. A young didgeridoo player, William Barton, wowed the crowd with his hip-hop beats, imitating Michael Jackson's moonwalk with the fingers of his right hand, while imploring (into the mouth of his instrument), "Check this out."

The concert was also strong in its depth of guest artists. The young — and bespangled — organist Cameron Carpenter was on hand to deliver an enthusiastic Toccata in F Major by Bach, while soprano Renee Fleming, oddly disembodied via video, joined the Sydney Children's Choir to sing a was commissioned to write a piece especially for the concert that had space built in for improvisations. A squealing electric guitar solo seemed jarringly gratuitous, but the violin and guzheng (Chinese zither) solos fit better, oddly enough adding more than a bit of substance to an ambitious but ultimately fluffy piece.

Two young pros to keep an ear on paired off for the finale of Mendelssohn's Violin Concerto. Violinist Stefan Jackiw played with feline agility and a sense of style while Ilyich Rivas — a conducting whiz from Venezuela, who recently appeared with the Baltimore Symphony — led the orchestra.

Music by Britten (appropriately, The Young Person's Guide to the Orchestra) Grainger, Ginastera and Richard Strauss were also on the program. The music offered in the concerts leading up to the grand finale was equally diverse, from Astor Piazzolla and Paquito D'Rivera to Wagner, Varese, Cowell, Beethoven, Verdi and Mark-Anthony Turnage.