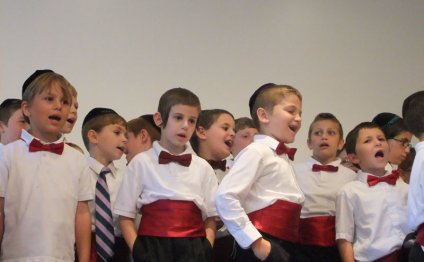 The audience at the Feb. 7 concert by the Boys Choir of Harlem never would have guessed that the performers were all suffering from fatigue if they hadn't been told so by the choir's founder and director, Walter J. Turnbull.

Energy, enthusiasm, and showmanship marked the choir's performances, which ranged from Handel and Mozart to traditional spirituals to a medley of ragtime and jazz numbers. Whether singing alone or with various Harvard musical groups, the 47-voice choir never failed to excite the capacity audience, which registered its approval with repeated standing ovations.

But tired they were - as anyone would be after four days packed with classes and lectures, demanding rehearsals, and a whirl of social events. The choir's residency, jointly sponsored by President Lawrence H. Summers and the Office for the Arts, was designed not only to give Harvard students the chance to work with the world-renowned musical group, but also to expose the choir members to the resources of Harvard.

Henry Louis Gates Jr., the W.E.B. Du Bois Professor of the Humanities, lectured them on the making of the Encyclopedia Africana with asides on the physical transformation of Michael Jackson and the origins of rap music.

Professor of English and American Literature and Language Elisa New conducted a class on the Robert Gould Shaw Memorial on Beacon Street in Boston and its significance in African-American history. Choir members perused original 19th century documents in Pusey Library, then piled into a bus to look at the actual monument, designed by American sculptor Augustus St. Gaudens.

Summers himself led an animated discussion on the fundamentals of economics. There were also classes on the Cuban Missile Crisis, the teaching and learning of music, the meaning of fairy tales, the American presidency, bioethics, Roman gladiatorial combat, and the civil rights movement, and a demonstration of chemical processes.

In spite of the demands placed on them during the week, the choir members seemed to take in a remarkable amount at this intellectual smorgasbord.

Ptah Lumumba, 14, spoke about the "great discussion" he had had about cloning and genetic disease at Government Professor Michael Sandel's lecture on bioethics.

Sherod Hill, 15, said that he'd enjoyed all the lectures he'd attended. "It's been a wonderful experience for me. I'm thinking about applying to Harvard."

Conductor Turnbull's graceful, inspiring conducting was often as mesmerizing as the performances he elicited from the boys choir and various Harvard instrumental and choral groups.

Such enthusiasm is not surprising coming from youngsters who are not only highly professional performers but also students at the Choir Academy of Harlem, a college preparatory public school that has been named one of the top 10 high schools in New York City.

Michael McDonald, 22, an alumnus of the choir and a recent alumnus of Boston University who now works as a counselor to the group, put the experience in perspective when he talked about the relation between the choir members' musical activities and the lessons they learn about aspirations and self-discipline.

"Music is just a hook to grab them with. It's a way to help them find their niche in life."

Jermaine Lewis (from left), Sean Haythe, and Corri Miller get handouts during an engaging discussion with Professor of English and American Literature and Language Elisa New about African-American history.

During a whirlwind week, including classes and a field trip, the choir has few moments to just sit back and chill. 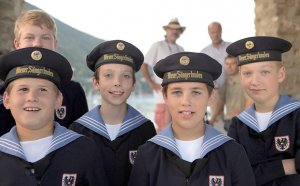