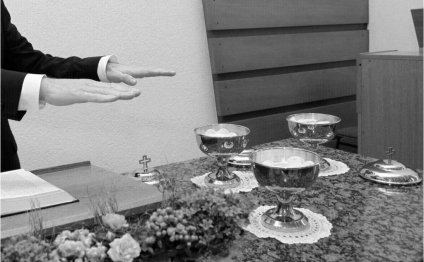 I just read this to my choir. These are excerpts from the latest document put out by the USCCB about the role of the music in the liturgy and more.

The following is excerpted from:Music in Divine Worship

Why We Sing
Obedient to Christ and to the Church, we gather in liturgical assembly, week after week. As our predecessors did, we find ourselves “singing psalms, hymns and spiritual songs with gratitude in [our] hearts to God.” This common, sung expression of faith within liturgical celebrations strengthens our faith when it grows weak and draws us into the divinely inspired voice of the Church at prayer. Faith grows when it is well expressed in celebration. Good celebrations can foster and nourish faith. Poor celebrations may weaken it. Good music “make[s] the liturgical prayers of the Christian community more alive and fervent so that everyone can praise and beseech the Triune God more powerfully, more intently and more effectively.”
Charity, justice, and evangelization are thus the normal consequences of liturgical celebration. Particularly inspired by sung participation, the body of the Word Incarnate goes forth to spread the Gospel with full force and compassion. In this way, the Church leads men and women “to the faith, freedom and peace of Christ by the example of its life and teaching, by the sacraments and other means of grace. Its aim is to open up for all men a free and sure path to full participation in the mystery of Christ.”

Participation
Within the gathered assembly, the role of the congregation is especially important. “The full and active participation by all the people is the aim to be considered before all else, for it is the primary and indispensable source from which the faithful are to derive the true Christian spirit.”

The Church at Prayer – The Gathered Liturgical Assembly
Singing is one of the primary ways that the assembly of the faithful participates actively in the Liturgy. The people are encouraged “to take part by means of acclamations, responses, psalms, antiphons [and] hymns. . . .” The musical formation of the assembly must be a continuing concern in order to foster full, conscious, and active participation.
So that the holy people may sing with one voice, the music must be within its members’ capability. Some congregations are able to learn more quickly and will desire more variety. Others will be more comfortable with a stable number of songs so that they can be at ease when they sing. Familiarity with a stable repertoire of liturgical songs rich in theological content can deepen the faith of the community through repetition and memorization. A pastoral judgment must be made in all cases.

Ministers of Liturgical Music
The Choir
The Second Vatican Council stated emphatically that choirs must be diligently promoted while ensuring that “the whole body of the faithful may be able to contribute that active participation which is rightly theirs. . . .” The choir must not minimize the musical participation of the faithful. The congregation commonly sings unison melodies, which are more suitable for generally unrehearsed community singing. This is the primary song of the Liturgy. Choirs and ensembles, on the other hand, comprise persons drawn from the community who possess the requisite musical skills and a commitment to the established schedule of rehearsals and Liturgies. Thus, they are able to enrich the celebration by adding musical elements beyond the capabilities of the congregation alone.
Choirs (and ensembles—another form of choir that commonly includes a combination of singers and instrumentalists) exercise their ministry in various ways. An important ministerial role of the choir or ensemble is to sing various parts of the Mass in dialogue or alternation with the congregation. Some parts of the Mass that have the character of a litany, such as the Kyrie and the Agnus Dei, are clearly intended to be sung in this manner. Other Mass parts may also be sung in dialogue or alternation, especially the Gloria, the Creed, and the three processional songs: the Entrance, the Preparation of the Gifts, and Communion. This approach often takes the form of a congregational refrain with verses sung by the choir. Choirs may also enrich congregational singing by adding harmonies and descants.
At times, the choir performs its ministry by singing alone. The choir may draw on the treasury of sacred music, singing compositions by composers of various periods and in various musical styles, as well as music that expresses the faith of the various cultures that enrich the Church. Appropriate times where the choir might commonly sing alone include a prelude before Mass, the Entrance chant, the Preparation of the Gifts, during the Communion procession or after the reception of Communion, and the recessional. Other appropriate examples are given in the section of this document entitled “Music and the Structure of the Mass” (nos. 137-199). The music of the choir must always be appropriate to the Liturgy, either by being a proper liturgical text or by expressing themes appropriate to the Liturgy.
When the choir is not exercising its particular role, it joins the congregation in song. The choir’s role in this case is not to lead congregational singing, but to sing with the congregation, which sings on its own or under the leadership of the organ or other instruments. Choir members, like all liturgical ministers, should exercise their ministry with evident faith and should participate in the entire liturgical celebration, recognizing that they are servants of the Liturgy and members of the gathered assembly.
Choir and ensemble members may dress in albs or choir robes, but always in clean, presentable, and modest clothing. Cassock and surplice, being clerical attire, are not recommended as choir vesture. 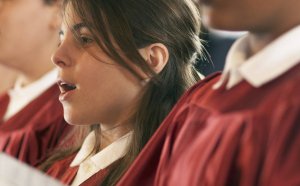 A couple of times a year, I find myself getting roped into singing in the church choir. Now don’t get me wrong; it’s not…