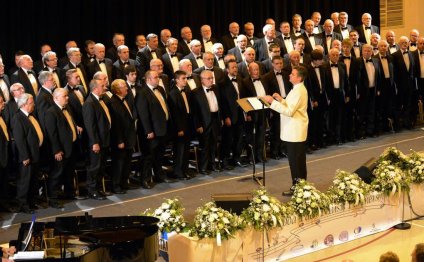 Côr Meibion Taf was formed in 2004 by Musical Director, Rob Nicholls when around twenty men gathered in Tabernacle Chapel, The Hayes, Cardiff, with the intention of establishing a Welsh medium Male Choir in the capital city. Since its inception, the choir has grown to include over seventy members, with many of the original members remaining within the ranks.
Over the past ten years they have won first prize at the National Eisteddfod on two occasions, and have performed many times on radio and television both within Wales and overseas. The Choir also appeared on Spanish television whilst on tour there in 2011.

Côr Meibion Taf are regularly invited to perform in concert for various charitable causes, and have sung many times at the Millennium Stadium as the invited choir before international rugby matches. They have also appeared on stage at the Royal Albert Hall, London as part of the biannual London Welsh Festival of Male Choirs.

Pendyrus has been one of the foremost Welsh male choirs for over 85 years. The Choir performs throughout the British Isles and overseas. It undertakes fee-paying and charity engagements, and is available for concerts, after-dinner and corporate entertainment, and national and promotional events.

The Choir was formed in the the early 1920’s by two young out-of-work miners, Ben Jones and Emlyn Drew, who lived in Tylorstown, a village in the Rhondda Fach (the smaller of the two world-famous Rhondda valleys). They contacted friends and former work-mates, and, within weeks, enough men had shown interest to make the idea a reality. They approached a local baker, who was an amateur musician with conducting experience, and he accepted their invitation to conduct a new “male voice” choir, which was formally inaugurated on 24th May 1924 in the local Miners’ Federation hut.

Auditions were held in the vestry of Ebenezer Chapel, Tylorstown, each man being required to take a “voice test”. The story has it than many escaped through the windows rather than face this ordeal, but many more stayed, and passed the test. Within a short space of time the choir numbered 150 choristers, and outgrew the facilities of the chapel. It then moved to Tylorstown Junior School, which was to be its home for the next 75 years.

The original collier-choristers were joined by school-teachers, shopkeepers, and others from the local community, and walked to twice-weekly rehearsals, and to concerts. Although depleted during the Second World War (many members having been called to the armed forces), the choir did not cease to function. It regained its former strength during the late 1940s/early 1950s, and has since had a constant membership of about 100 men, drawn from all walks of life in South Wales.

Pendyrus has the distinction of being the only Welsh choir to have been invited to Aldeburgh, Britain’s most prestigious festival (in 1979), and has performed at the Abergavenny, Burnley, Cardiff, Coleraine, Corby, Glasgow, Glastonbury, Leek, Llandaff and Oundle Festivals, and at Llangollen International Eisteddfod. It has given recitals in Ely, Hereford, Llandaff, Wells, St David’s, St Woolos (Newport), and Worcester Cathedrals, and at Dorchester, Margam and Tewkesbury Abbeys.

The choir has toured twice in Northern Ireland and five times in Scotland, and has appeared in the Isle of Man. Other British concert venues include the Royal Albert Hall, the Royal Festival Hall, Queen Elizabeth Hall, and St John’s Smith Square in London, Birmingham’s Symphony Hall, Liverpool Philharmonic Hall, the Brangwyn Hall, Swansea, and Cardiff International Arena. Pendyrus appeared in the Opening Concert of the Wales Millennium Centre in November 2004, and has made a record 58 appearances in 22 years at St David’s Hall, Cardiff.

The choir has frequently performed with the BBC National Orchestra of Wales, with internationally recognised soloists, and under the direction of distinguished conductors. It has appeared before the Queen and other members of the Royal Family, and has featured in radio and television programmes throughout Europe, America and the former Soviet Union.

Pendyrus has made 13 overseas tours – the first in 1965 - and its itinerary reads like an international gazetteer.It is the only Welsh choir to have performed in the White House and the Kremlin, and at the British Embassies in Washington and Moscow, and, for good measure, has given impromptu “mini-concerts” in Baffin Island, Greenland, Iceland, Bahrain and Singapore during the course of its travels.

Dunvant Male Choir enjoys the distinction of being one of the oldest continuous serving choirs in Wales. It was formed in 1895 by a group of miners, steelworkers and quarrymen from the membership of the local Ebenezer Congregational Chapel. It was initially called the Ebenezer Excelsior Male Voice Choir, but as its membership grew, its name was shortened to the current Dunvant Male Choir (Côr Meibion Dyfnant).

The choir has made frequent visits to the USA, Canada and across Europe, including tours to Germany, France and Ireland. The choir's most recent tour was a memorable ten day visit to Singapore in March 2012 which included providing entertained at the Feast of St. David's Ball for the St.David's Society of Singapore, and other prestigious engagements including a reception by the British High Commissioner.
Dunvant Male Choir has performed on nine occasions at the Royal Albert Hall, London, often as a sole male choir, and also at the Chapel of Kings College Cambridge, the Chapel of Harvard University, the Roy Thompson Hall in Toronto and in numerous UK Cathedrals including Chichester, Exeter, Gloucester, Hereford, Lichfield, Salisbury and York. The choir has also made numerous television and radio appearances.

The 200 voice massed male choir will feature, together with Wales and the world's number one brass band, the Cory Band, in the celebratory Brass & Voices concert on

Tom Richards (Pendyrus Male Voice Choir) - This Is The Moment 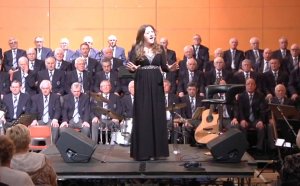 Ninety plus choristers now form the choir, which is a registered charity. Its aim is to support all good causes with fundraising… 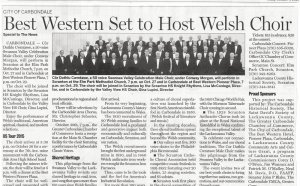