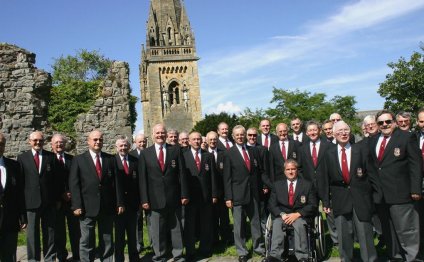 Founded in 1898, Cardiff Male choir is one of the oldest choirs in South Wales. We sing a wide variety of songs, including; Welsh hymns and arias, Jazz classics and gospel numbers, songs from the shows, sentimental songs and ballads, choruses from the great operas, traditional songs from Way Back When, and even the odd latest hit!

The latter part of the 19th century and early 20th century was a time when people provided their own entertainment. During this time there was a great deal of musical activity in Cardiff.

The city was the host to the National Eisteddfod in 1899. A special work, “Jesus of Nazareth”, which is hardly ever performed nowadays, was commissioned from Joseph Parry for the occasion. Several choirs were formed at this time to take part in the forthcoming eisteddfod of which one was the Canton Male Voice Choir founded in 1898. Canton comes from the name St. Canna’s Town (in Welsh Treganna). Canna was a 6th century female saint after whom Pontcanna is also named.

The choir is one of the oldest in Wales. It has survived the changing economic fortunes and social attitudes of the years. During its lifetime the choir has travelled many thousands of miles to entertain the public and has given well over 2500 concerts. It has sung in halls, churches, theatres, cinemas, the streets and even a farmyard. Sons and nephews followed fathers and uncles in to the choir to continue the family tradition. Choristers from many trades and professions look upon each other as members of an extended family. We have in our choir choristers who are life members. This is an honour bestowed on a chorister when he has served 25 years in the choir. A beautiful sound is made when words and music are blended together in choral singing. Men who have had no previous knowledge of music or singing are taught to produce this sound for the benefit of those in need. This sets apart male choirs from many other choirs and choral societies and it is a practice and tradition we are proud to continue.

It all began at the end of the reign of Queen Victoria when a group of men met in a back room of the “Old Barley Mow”, later renamed “The Exchange”, a public house in Cowbridge Road. The choir’s second season was just getting under way in the autumn of 1899 when the Boer War broke out. At the beginning of the 20th century, perhaps in keeping with the strong temperance feelings of the time the choir moved to the Y.M.C.A. Building in Wellington Street. Of the early years little detail has survived.

After the upheavals of World War 1 which claimed the lives of many choristers, the choir, under the baton of Mr. W. Napier, started on the path of re-establishing itself. In the 1920’s, with a numerical strength in the 90’s the choir was augmented by members of the old “Cambrian” choir. It was from this time until the late 1940’s that the Memorial Hall, Cowbridge Road became the headquarters although the Primitive Methodist Chapel in Severn Road was also used for extra rehearsals.

The conductor’s baton was taken over by Mr. N. W. Harper of Llandaff. The choir was affected little by the industrial crisis of the early 20’s and so when the first post-war annual concert was held on 8th December 1920 almost 1000 tickets were sold. So great was the demand to hear the choir sing that the 1921 concert was held on two nights, the choir performing to full houses on both nights.

The choir’s success brought recognition from the organisers of musical events in the city. The choir appeared at the Empire in 1922 and later at the Olympia. In February 1923 there started a long association with the well remembered Park Hall concerts.

A note for the gourmets follows. A dinner held at the Queens Hotel on 31st March 1922 to celebrate the choir’s success cost 3/6d (17½p) per head for four courses.

The choir was in great demand in all parts of Cardiff at this time but success was not confined entirely to the concert platform. Competition work also brought success at Bridgend, Blackwood and other places in south Wales. At the end of the decade, however, the crest of the wave had gone. Under a new conductor, Mr. J. Archie Parker, it was revived for a time, but then came the 1930’s.

The 1930’s proved to be a period of great change for the choir, bringing a succession of conductors and accompanists. There were peaks of fortune with wins at eisteddfodau, but looming over the choir, like every other organization, was the Great Depression. During this time the choir sang for the unemployed in Cardiff, a number of the members being unemployed themselves.

As work became available in other parts of the country, many had to resign their membership because they were leaving Cardiff to find employment elsewhere. Numerically the choir’s numbers fell by 50%.