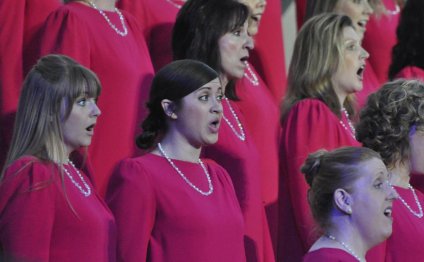 The Mormon Tabernacle Choir and the West Point Band joined musical forces to thrill an audience of more than 10, 000 spectators at the 2015 Fourth of July concert, “Music Under the Stars.” Four thousand cadets, including the new freshman class at West Point, arrived in military formation for the Independence Day gala on Trophy Point overlooking the Hudson River.

Dubbed “America’s Choir” by President Ronald Reagan, the 360-member choir and 65 members of the orchestra united with the West Point Band for a rousing performance of American patriotic standards such as “America the Beautiful, ” “Yankee Doodle Dandy, ” “The Stars and Stripes Forever” and “The Battle Hymn of the Republic.”

“I cannot think of a more appropriate way for us to have honored our servicemen and women both past and present than by sharing our talents on the hallowed grounds of West Point, ” said Ron Jarrett, president of the Mormon Tabernacle Choir. “We felt deeply honored to be a part of this magnificent celebration this year.”

The legend of the West Point Band, also known as the Hellcats, began early in the American Revolution, when units of George Washington’s Continental Army, including fifers and drummers, established the garrison of West Point in January of 1778.

The concert is being produced as a half-hour radio and TV special for next year. Ed Payne, the executive producer of the Mormon Tabernacle Choir’s weekly broadcast of “Music and the Spoken Word, ” is heading up the recording project. He was inspired by a similar special the choir recorded with legendary news anchor Tom Brokaw to celebrate the 10th anniversary of September 11.

“The choir and orchestra are part of the patriotic fabric of our nation, ” said Payne. “It is about as iconic as it gets to produce a special celebrating the lives of all those who sacrificed to keep us safe and free.”

While on tour on the Eastern seaboard, the choir and orchestra also performed in Bethesda, Maryland, and in upstate New York at Bethel Woods, the home of Woodstock, at the Saratoga Performing Arts Center and in two concerts at the famed Carnegie Hall in New York City. The tour will conclude in Boston, Massachusetts, on July 6 with a concert at the Citi Performing Arts Center Wang Theatre.