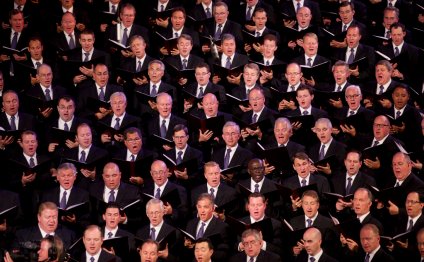 Few things are as powerful as men's voices united in song. Now, that stirring sound has been captured by the men of the Mormon Tabernacle Choir in a triumphant collection of music — the first album ever to feature exclusively the men of the Choir.

Listeners of all ages will enjoy hearing the Choir's soaring tenors, rich baritones, and strong basses lend their voices to moving arrangements of favorite songs as well as some of the most classic pieces written for male chorus including "Brightly Beams Our Father's Mercy, " "Beautiful Savior, " "Pilgrims' Chorus" from Tannhauser, "You Raise Me Up, " and Billy Joel's "Lullabye (Goodnight, My Angel)."

The Choir is not what it used to be

I have been a fan of the Choir since 1963, when I purchased "The Lord's Prayer, Vol. 2". While they have grown in size and quality since then, I feel that, since the departure of Jerold Ottley and Craig Jessup, they are sounding more and more like a college mixed chorus than the greatest Choir in the USA - perhaps the world. The voices are thinner, like they are coming from the throat and not the diaphragm. Just compare "The Pilgrim's Chorus" on this album with the same chorus on "Great Opera Choruses, " an album produced under the direction of Richard P. Condie. You'll hear the difference immediately. On other albums released lately, you can hear the difference between this Choir and the Choir as directed by previous conductors. It gets worse every year. The women's sections are thinner and the first sopranos, as well as the first tenors, are frequently shrill, tight and thin on high notes. The entire Choir is now conducted to drop off at the end of phrases when the phrase concludes on a quarter note. They get immediately softer, and they close off the word they're singing in about half the value of the note the word was given by the composer. It makes what they are singing unintelligible. I have to use the album's notes, where the words to the pieces are provided, just to understand them. The arrangements sometimes feel like they are the featured artist instead of the Choir. While this is a lovely album, it does not represent the musical quality thet had when it was just the three of them - the conductor, the organist/accompanist, and the rich, full, properly produced musical sound of all those rich, full, musically mature voices working together.

Most of you have no clue as to what I've said and are uplifted, comforted or thrilled with the sound they currently produce, because you were not born mid-twentieth century, and are not trained musicians, let alone a trained singer. I am. So, you are right. I won't purchase any of the Choir's current CDs. And, from this point on, I won't criticize them publically. But I DO intend to continoe to enjoy the other CDs and the one LP I own and love. And I suppose I will be the only person in the Church who hears anything different in their sound, because they still are unsurpassed at creating an atmosphere for the presence of the Lord's Spirit.

A little dissapointing
By

Men of the Mormon Tabernacle Choir sing "You Raise Me Up"