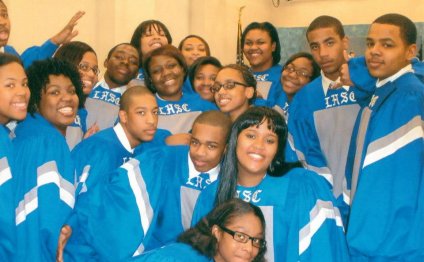 “A lot of people are like, ‘oh what ya’ll do? Ya’ll just sing?’ But it’s more than singing to us in the choir. To us its just, the environment that we’re in, ” said Dyonna Nelson, a senior at Largo High School. “It’s not just singing. It’s something special.”

“People normally think ‘oh you’re just in there making noise, ’ but the music that we sing, it has a meaning, ” said Sharlene McCall, a junior.

The students in the Largo High School choir have a passion for their group, for their instructor, and for their school and for them, their choir is a family. And this family is taking their music to new levels.

For the second year in a row the Largo High School Choir applied for the GRAMMY Signature School Enterprise Awards. This year, they were named semifinalist.

The GRAMMY school awards are awarded through the GRAMMY Foundation, which awards schools based on skill, need and dedication to their music program. The program was created in 1998 and recognized the top public high schools in the United States. The Enterprise Award is specifically for schools hat are economically underserved.

“From our perspective, many public high schools across the country provide top-notch music education programs for their students – often working with very limited financial means, " said Neil Portnow, president and chief executive officer of The Recording Academy and the GRAMMY Foundation. “Our GRAMMY Signature Schools program steps in to augment those resources with cash grants, and to celebrate the excellence of these programs, and the beneficial and lasting effects of a music curriculum in the lives of young people.”

Approximately 20 schools across the nation were selected as enterprise semifinalist and each winning school will receive approximately $5, 000. Bladensburg High School won the honor in 2011. Largo was the only school in the Mid-Atlantic region to make it to the semifinals this year. Now the choir must record 11 songs to send to the foundation to help them make the final decision.

Brandon J. Felder, the music and arts chairperson at Largo and the choir’s director, said the school turned in its application in September to start the long and exciting process. He said he decided to apply for the grant to help fund some music-based projects in the school and increase the visibility of the choir.

“There are extreme sources of scarce funding for music programs in a time when programs are being cut, not even because of smaller numbers, but just because of budget crisis. I’m always looking for creative ways to fund our program and show visibility, ” Felder said.

The money, Felder said, will help to finish a new music lab in the school, where students can compose and get hands-on music writing and producing experience.

Hands-on experience is a key to the music education at Largo High School. Felder said he strongly believes in a hands-on, performance-based choir.

“We’ve been in competitions this year. We perform very regularly. That’s part of my philosophy – students learn a lot more outside the four walls of the classroom in performance and music education than what they will learn in the classroom, ” he said. “A three-day tour at Ithaca College, which we toured at, will be more beneficial than a month of learning a piece of music.”