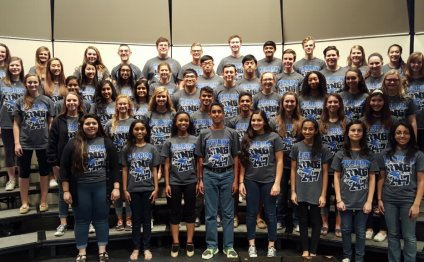 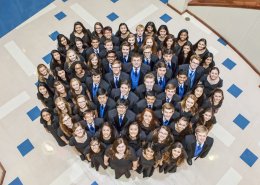 CARROLLTON, Texas (February 20, 2015) – The Hebron High School A cappella Choir was one of only two mixed choirs invited by the Texas Music Educators Association (TMEA) to perform at their recent convention in San Antonio. Their concert at the event featured six vocally diverse choral selections, including one song, “Summer’s Ocean” by Eric Barnum, which was commissioned specifically for the A cappella’s performance at the 2015 TMEA Convention. The choir performed on Friday, February 13, 2015, to a packed ballroom at the Henry B. Gonzalez Convention Center. The TMEA Convention is the largest of its kind in the nation and boasts over 26, 000 attendees from across the state of Texas and beyond. Being invited to perform is an incredible honor and distinction not only for their director Rachel Forester and assistant director Nathan Ratliff but also for the 65 students who comprise the Hebron High School A cappella choir and worked extremely hard to reach this pinnacle of success.

Additionally, five of these Hebron A cappella students also sang with the All-State choirs that performed on Saturday, February 14, 2015, at the Convention. There are three All-State Choirs which students from large schools may qualify – Women’s Choir, Men’s Choir, and Mixed Choir. Selection for an All-State choir is a multi-tiered audition process that begins in September of each school year. Therefore, being chosen to one of the All-State choirs is the highest honor a Texas music student can receive.