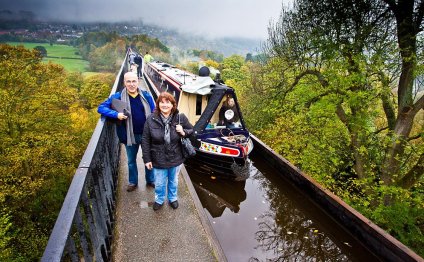 The result of a small Welsh town's attempt at furthering world peace in the aftermath of World War II, the Fron Male Voice Choir (or Froncysyllte Male Voice Choir, its full title, or Côr Meibion Froncysllte, in Welsh) was founded in 1947 and remained an award winning amateur chorister group for over sixty years. The plan, back in 1946, was that the Welsh town of Llangollen would sponsor a traditional Welsh Eisteddfod (essentially an annual festival that involves friendly artistic and cultural competition) and would invite former war enemies to further said peace. The village of Froncysyllte - near to Llangollen - wished to compete, and a town meeting was called to establish the male voice choir. The choir continued to thrive over the next sixty or so years, and in 2006 Universal stepped in and signed the choir and released the album Voices of the Valley, which would peak on the UK charts at #9. In December of 2007, a second album was released, entitled Voices of the Valley Encore, and reached #11. ~ Chris True

Voices of the Valley - The Fron Choir - Sailing