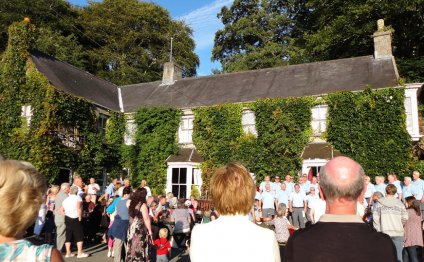 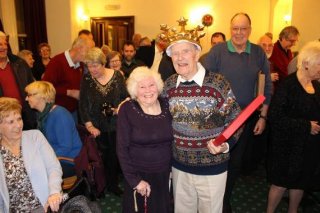 Male voice choirs are made up of people from a wide variety of backgrounds and ages with one thing in common, their love of singing (writes A.G.K).

As a special treat, Duncan was allowed to conduct the choir for the last 15 minutes of our rehearsal. Little did he realise that whilst he was waving his arms upstairs, his wife Audrey, also 90, was downstairs finalising arrangements for a surprise party with old friends, partners of the choir and of course family.

A stunned Duncan was very moved, so much so that he was lost for words - not a common occurrence for Duncan. To mark the event in the words of chairman Paul Varallo, the choir gave Duncan something as old as he was, an original newspaper the Sunday Pictorial, dated Sunday, March 14, 1926. A day to remember. After that, the evening continued with a wonderful buffet, tasty cake, good conversation and not a little beer and wine.

It’s great to see Duncan fighting fit at 90, but if he had tried a little harder and been born just 47 years earlier, he would have shared his birthday with Albert Einstein. He’s in good company.

We are fortunate in a climate where some male voice choirs are struggling to keep up their numbers, to continue to grow.

This year already we have three new members, all very welcome additions to the top tenor section which has been a bit short of numbers recently.

The three new members are Terry Williams, Henry Johnson and Chris Aaron who have backgrounds in construction, local government and chemical engineering amongst other things from time to time.

In common with the existing character of the choir, they are also originally from far afield Terry from Bath, Henry from Kent and Chris from Yorkshire

It’s great to see new singing members but a choir is more than just about singing.

There is an active social side to choir membership, including travelling to away venues.

New people are always welcome to join our organisation even if they don’t feel able to join in the singing part of it.

There is a lot to do in a choir and there is a place for people who want to join in the social side, but also help out with the various administrative jobs that go with running a choir.

I suppose it’s a bit like a football or rugby club where there are both the players and other very valuable people backing them up.