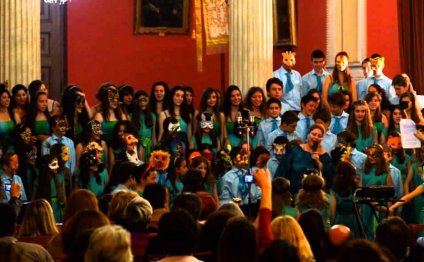 We have prepared a season of CELEBRATION, INSPIRATION, and far off DESTINATIONS…including the highly-anticipated ONE-NIGHT-ONLY concert with one of the world’s most celebrated vocal groups, THE KING’S SINGERS, plus some all-time favorites from the last 20 years. Don’t miss a single note and get your tickets TODAY!

The Choral Project wraps up its 20th season with a program featuring music from far off destinations. Along with a world-premiere arrangement of “Summertime” by acclaimed composer/arranger Mac Huff, the choir will offer Moira Smiley’s engaging “Bring Me Little Water, Silvy, ” and Ysaye Barnwell’s touching “Wanting Memories, ” as well as favorites from the past twenty seasons, including Theodore Lucas’s playful and moving “Together, ” Lebo M’s freedom song “One By One” from Disney’s Broadway musical The Lion King, and the ever-popular setting of Robert Burn’s poem, “A Red, Red, Rose” by James Mulholland.

We invite you to hear us in three locations: First Presbyterian Church of Palo Alto, Peace United Church of Christ in Santa Cruz, and Mission Santa Clara de Asis. Join us as we conclude a season of celebration!