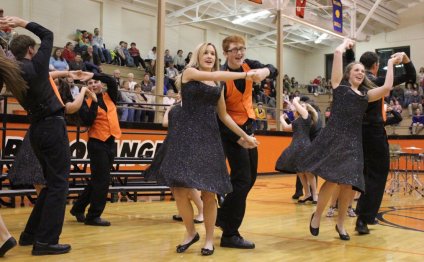 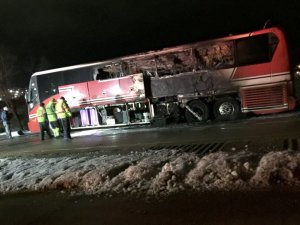 The show went on for an Illinois high school choir whose bus caught fire on the way to a competition, destroying everything on board.

Despite the major setback, the Wheaton Warrenville South High School show choir was able to win the invitational competition last Saturday, with a little help from parents, alumni and even a competing high school.

During the four-hour drive from the city of Wheaton to Onalaska, Wisconsin, Friday night, a tire popped on one of the charter buses transporting more than 40 choir members to the competition, causing a massive fire. Although everyone escaped the bus unscathed, the members watched as their costumes, band instruments and personal belongings burned in the fire, choir director Kelsey Nichols told ABC News.

Nichols said as the girls waited for another bus to come, they rallied around each other and used the incident as a motivator.

“I think my girls are so strong, " Nichols said. "They are mature beyond their years."

A wheel popped off the bus that was transporting the Wheaton Warrenville South High School show choir, causing a fire and destroying everything on board.

His 17-year-old daughter, who was riding on the other bus, texted him shortly after the incident to let him know everyone was safe. Nichols then had to figure out a way to get the girls clothes for the morning performance.

When word got out of the devastating bus fire, several Good Samaritans came to the rescue, including parents and even the competition's host, Onalaska High School, who donated extra costumes for the girls to wear, Claypool said. 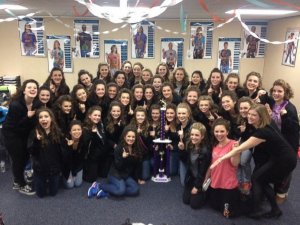 "As a principal and a dad, it was probably the most remarkable and touching thing I’ve experienced in my years as an educator, " he said.

Half of the Wheaton Warrenville South High School girls show choir wore silver, beaded dresses - extra costumes they had in storage. The other half wore glittering purple sequined dresses, loaned to them from the competition. Parents showed up in Wisconsin Saturday morning with makeup, shoes and everything else the girls needed for the performance at 11:30 a.m.

The Wheaton Warrenville South High School show choir won their first invitational of the year, despite their bus catching fire and destroying all of their costumes, band instruments and belongings.

The Wheaton Warrenville South High School show choir won a first-place trophy in their division with a set themed "Four Girls Putting on a Rock Band." They sang and danced to songs by Sly & the Family Stone, Miley Cyrus and Simple Plan, Nichols said.

"It was unbelievable, " Claypool said, calling the win an "amazing testament" to the show choir's competitive spirit.

After the competition, Nichols said several congratulatory hugs between Wheaton and Onalaska high schools were exchanged in the hallways.

"It warmed my heart, " she said, "and made me really proud of their spirit."

The next competition for the girls show choir, nicknamed "Esprit, " is this weekend in Marysville, Ohio. The girls will be wearing another set of donated outfits, this time from a neighboring school.

Each costume came with a personalized note from the other school, wishing the girls luck, Nichols said.