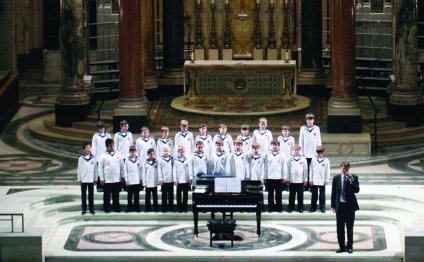 Sylff fellow (2005, University of Music and Performing Arts Vienna) and conductor/pianist Jimmy Chiang has performed in venues around Japan as the resident conductor of the Vienna Boys’ Choir.

He and the choir’s “Haydn Team” went on an extensive tour of Japan from late April to mid-June. As in many countries, the Vienna Boys’ Choir is extremely popular in Japan and Jimmy’s Choir performed at many of the most prestigious concert halls in the country, including Suntory Hall and Tokyo Opera City.

“I have been conducting mainly operas and symphonies, so I was surprised when I was approached to conduct the Vienna Boys’ Choir last year. I think I made a positive impact in the short time I ‘ve been with the choir, and I have enjoyed the experience enormously.”

Jimmy has endeavored to make performances more entertaining and engaging. Under Jimmy’s guidance, the boys not only sing but also perform musical instruments, including piano and percussion, and sometimes surprise the audience by appearing on the balcony, giving the impression of yodeling from mountain to mountain. Audiences in Japan have been thrilled. Jimmy’s experience in opera has enabled such dramatic and creative forms of expression, which represent a break from traditional, orthodox choir singing.

Jimmy’s extensive experience and skills have been effective in leading the choir from day one. “I have been pushing the boys to be more professional by showing them my own professionalism as a musician.” Jimmy is a father of two boys and says that being a father has helped him to be strict and loving at the same time.

As a message to young Sylff musicians, he had this advice: “Be honest. Be honest with your music. Be honest with your audience. It’s a challenge building a musical career, but don’t compromise. Try not to lose your originality, and always keep in mind what you set out to do in the beginning.”

Jimmy Chiang
After receiving a Sylff fellowship in 2005 at the University of Music and Performing Arts Vienna, where he studied orchestral conducting, chorus conducting, and piano, he was awarded the First Prize in the renowned Lovro von Matacic International Competition for Young Conductors in 2007. His career since has taken him to the most distinguished stages around the world. As a Sylff fellow, he has also participated in charity concerts with other fellows at the University of Music and Performing Arts Vienna. Besides his active performing schedule, Jimmy also devotes himself to music education, serving as artistic adviser to the Hong Kong Children’s Symphony and as tour leader and performer since 2011 of children’s opera productions of Kinderoper Papageno, seen by over 15, 000 children in the German speaking world.
Jimmy’s official website: www.jimmychiang.com

The Choir Boys - Tears in Heaven/video