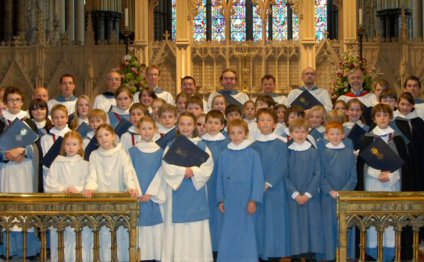 There have been choristers in Lincoln since the Middle Ages. Our current choir is made up of 20 boys and 20 girls who are all music scholars at Lincoln Minster School and 11 altos, tenors and basses (who are a mixture of permanent Lay Vicars and annually-appointed Choral Scholars. The cathedral’s music is led by four full-time members of staff: the Director of Music, the Assistant Director, the Organist Laureate and an Assistant Organist.

The choir sings Evensong every day except Wednesday during choir term with a sung Eucharist and Mattins in addition each Sunday and the choir also performs in concert throughout the year. Radio broadcasts, foreign tours and CD recordings are also important parts of the choir’s work.

Lincoln Cathedral Consort is the mixed-voice, volunteer chamber choir of Lincoln Cathedral, who perform services and concerts at the Cathedral and around the Diocese under the direction of Hilary Punnett, Assistant Organist. The Consort regularly sing services throughout the year, and sing at high-profile events such as the Lincolnshire Police Carol Service, and the Lincolnshire County Council Service. The choir frequently sing in parishes throughout the diocese and beyond, and even tour outside of England occasionally. The Consort performs many centuries of music, from sacred to secular, including a specially commissioned work by Thomas Hewitt-Jones, written in 2013.

The Choral Foundation has been an integral part of the Cathedral s life since mediæval times. The original Cathedral statutes…