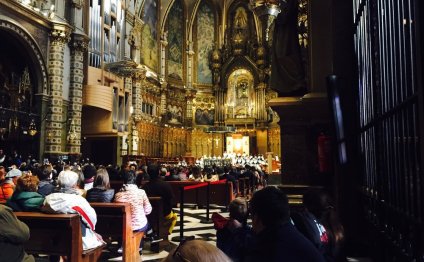 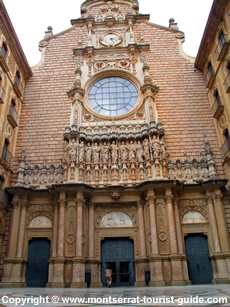 The Basilica at Montserrat

There is also a link to a page providing information on how to contact the Monks at Montserrat and what they can be contacted regarding.

If you are looking for more general information about Montserrat Monastery and Sanctuary as a whole, it is worth checking our Tourist Attractions of Montserrat page. This page will provide links to detailed pages on the Black Madonna, L'Escolania choir, the Montserrat funiculars, Montserrat natural park, Montserrat Museum and the shops at Montserrat.

The history of Montserrat Monastery

It is not known exactly when Monks first came to Montserrat and began to build a Monastery. However, it is believed that in the ninth century four of the Chapels were built on Montserrat Mountain (St Mary's, St. Iscle's, St.Peter's and St. Martin's). It is believed that these were inhabited by hermit Monks who lived a solitary life of prayer. Today only one of these Chapels is still standing - St.Iscle. If you would like to visit St.Iscle Chapel, it is located in the Monastery garden (see our Montserrat Map page for how to find it).

In 1025 the Abbot of Ripoli and Bishop of Vic, Oliba, officially founded the Monastery of Montserrat. During the twelfth and thirteenth centuries a Romanesque church was built in Montserrat containing a carving of the image of the Mother of God. Over this period pilgrims began to come to Montserrat.

Throughout the following centuries Montserrat's importance grew: in 1223 there is the first account of a boy's choir at Montserrat, in 1409 the Monastery became an independent abbey and in 1490 Montserrat's printing press was installed. In 1493 the Monastery's word was spread even further when one of the hermits from Montserrat - Bernal Boil - went on a voyage to America with Christopher Columbus. One of the islands in the Antilles was named after Montserrat and this began the spread of the worship of the Mother of God of Montserrat in the Americas.

In the 19th century Montserrat hit some troubling times. In 1811 - 1812 Montserrat was destroyed by Napoleon's army. Then in 1835 the Land Acts meant that the Monastery lost all of its property and all but one Monk left the Monastery. However, in 1844 the Monks returned to Montserrat and in 1858 the reconstruction of Montserrat began.

Again, in the twentieth century, the Monks experienced turbulent times during the Spanish Civil War (1936 - 1939). During this period the Monks were forced to leave the Monastery. Over the period of the war 23 Monks were killed. Fortunately, the autonomous government of Catalonia managed to save Montserrat and free it from looting and destruction. After the war the Monks returned and continued with the reconstruction of the Monastery.

In 1947 there was the Celebration of the Enthronement of the Image of the Mother of God (The Black Madonna). Since this time the Monastery has gone from strength to strength. The new museum has been added, in 1982 Pope John Paul II visited Montserrat, the Basilica has been restored and the entire complex has been built to cater for the large number of pilgrims who come to Montserrat each year.

The life of the Monks in the Monastery

There are about one hundred monks who are based at Montserrat Monastery. They follow the Order of St. Benedict and are linked to two other Monasteries - El Miracle and St Micheal of Cuixa. Their life is devoted to prayer and work. The Monks can be distinguished from other orders of Monks by their philosophy that there is an importance to everything that every person is. They are keen to welcome people from all walks of life to the Monastery.

The Monks listen to the voice of God through both the Holy Scriptures, developments in the Church and what happens in the world on a larger scale.

If you would like to contact the Monks at Montserrat, they are part of a department that is separate to the commercial team at Montserrat. They are open to requests in relation to retreats to Montserrat, stays in the Monastery for religious groups and special prayer requests.

Montserrat Monastery has a long and fascinating history. It has existed through much of Spain's turbulent history. A visit to Montserrat can really be enhanced by understanding a little about the history of the Order of Monks and the Monastery itself prior to your visit.

Montserrat Choir Boys in the Basilica 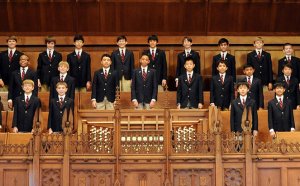